Playing Super Mario on the original Nintendo with my siblings is something I remember like it was yesterday. In fact, it was not yesterday, it was a very long time ago. Amazingly, Super Mario is still a fan favorite and a great kids Birthday Party theme. Today I’m posting 20 of my favorite Super Mario Party Ideas and including free Super Mario Party Printables.

What is Super Mario?

In case you are a parent that did not grow up playing Mario, here is a quick history lesson. Super Mario was a character created for Nintendo in the early 1980s. The plot of the game is usually pretty simple with Mario and his friends rescuing Princess Peach from a bag guy named Bowser The game usually takes place in the Mushroom Kingdom which is ruled by Princess Peach

Since then Mario, his friend Luigi and his gang of friends have been featured in over 200 different video games. Some of the titles you might hear your kids talk about include Super Mario Bros, Super Mario Kart, Super Smash Bros, Mario Maker and more.

There have been so many iterations of Super Mario over the years that it is a theme that can work across age-groups for girls and boys. Mario has a regular crew of friends there is usually at least one character that a child will like. The Mario Brother – Mario and Luigi, Bowser, Yoshi, Princess Peach, and Koopa Troopas there is lots to work with.

Also because of the different Mario games on the market, you can take some liberties and tie different videogames into your activities. From Mario Cart to Dr. Mario, he has pretty much done it all!

Once you download the set, all you have to is print, cut out and you are ready to go! Super simple and a great way to have a themed party without the added expense.

If you are looking for a fun favor to send your guests home with, download this free Nintendo Gameboy Favor box. The post includes easy to follow instructions, so this is a super simple craft. It is also a great way to get the kids involved in your Super Mario birthday planning. 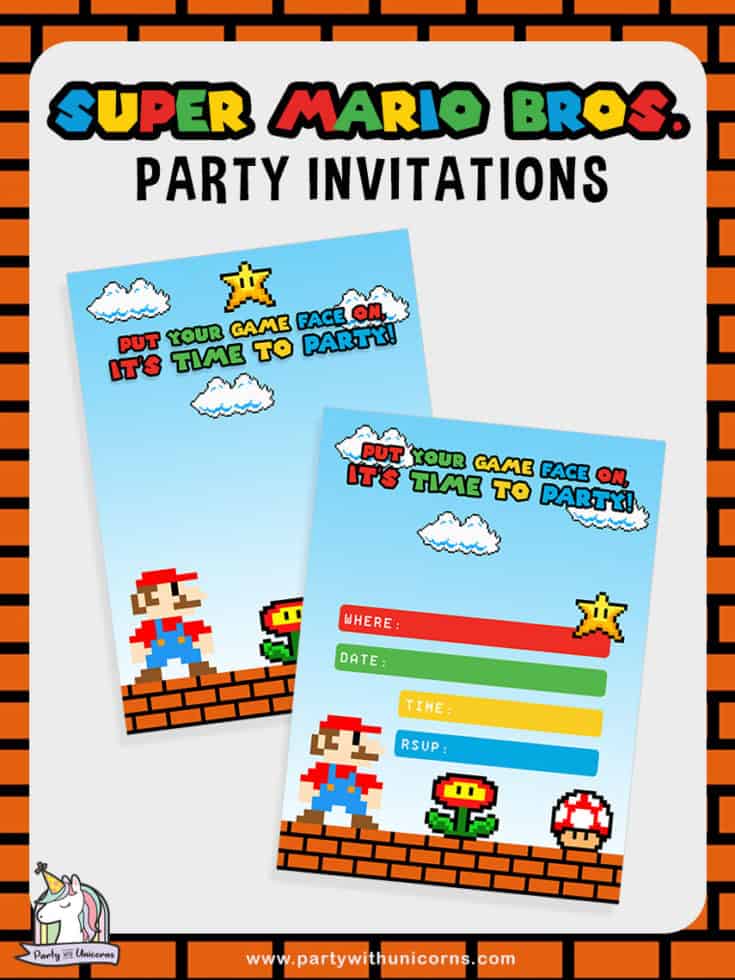 Start your party planning by inviting friends on the day of your child's party. Send a Super Mario Bros inspired invitation to them. I created this Free Super Mario Bros Party Invitation for everyone to use. Feel free to customize the template with your own wording and details. 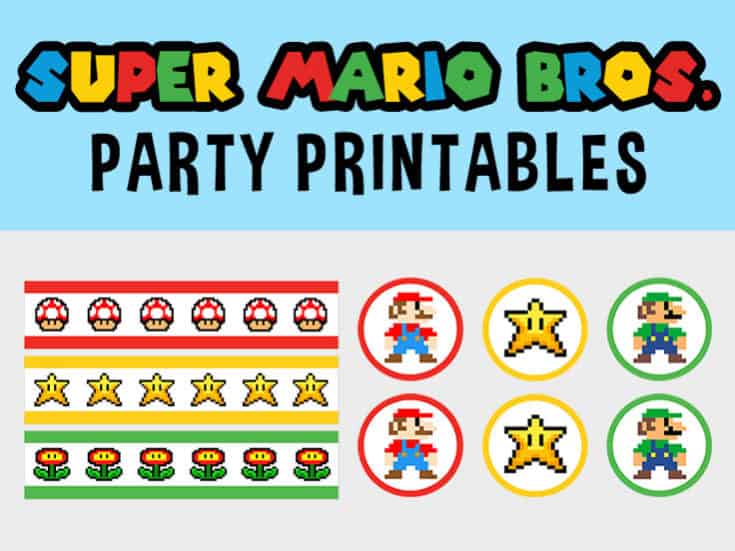 Decorate your place and food with another freebie I created. This matches with the Super Mario Bros party invitation. The printables include Mario party banner, cupcake topper, cupcake wrapper, soda/bottle wrapper, and thank you cards! 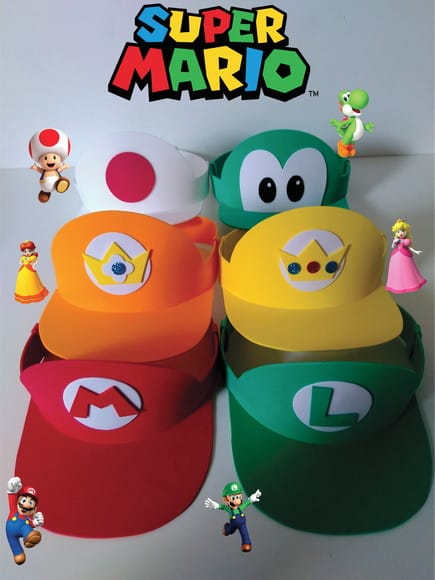 You can forget about the regular party hats and opt for this cute Super Mario Bros visor caps! Let the kids choose what character they want to be during the party. 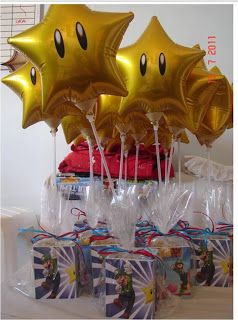 Another fun and easy way to decorate your place for a Super Mario Bros themed party is to purchase star foil balloons and add some eyes to make it look like the famous Super Star in Super Mario Bros game. 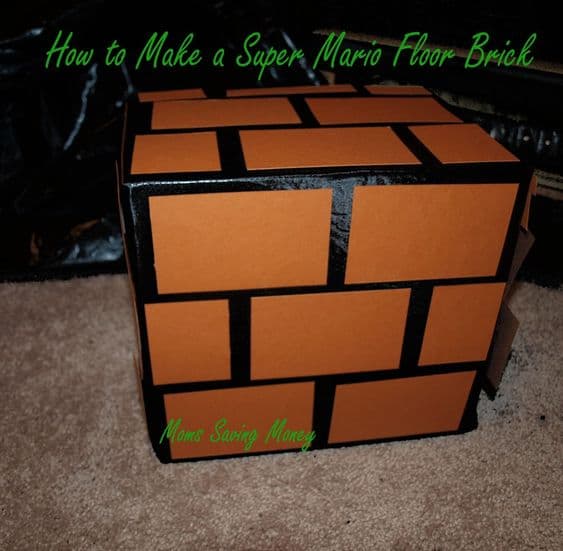 These DIY blocks are a cute way to decorate your party. You can also make blocks with questions marks, like in the Super Mario video games. 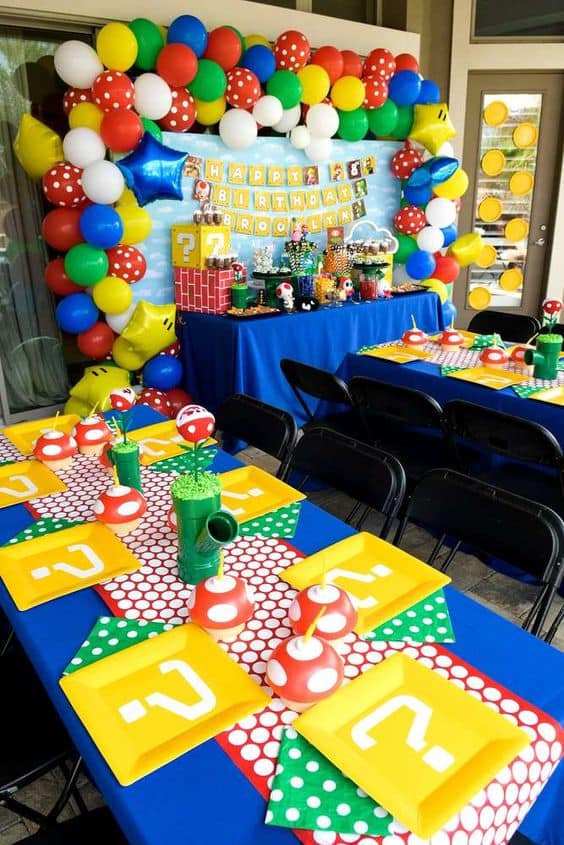 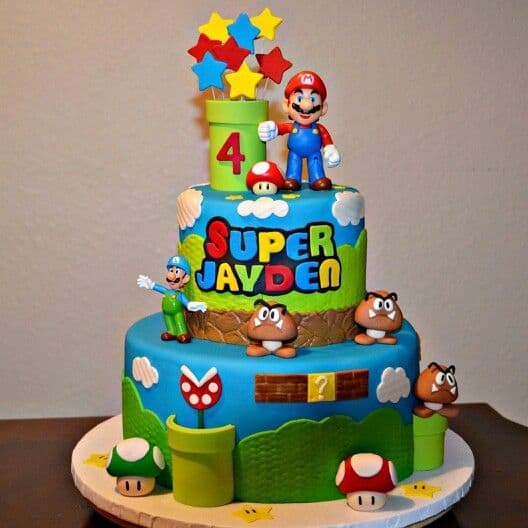 Here's a super cute cake inspiration for your Super Mario Bros themed cake! You can bake your own cake at home and let the kids join you in decorating it.

Photo Credit: www.asweetcake.com
These super-simple cupcakes are perfect for anyone looking for an easy to do dessert option. You can even use the free cupcake
wrappers from this list!
9 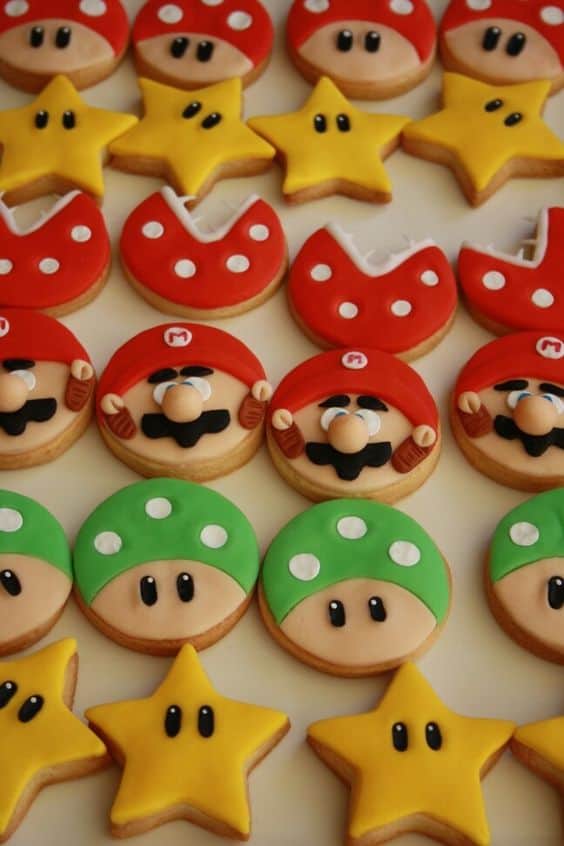 For your party food, bake some cookies and decorate it with Super Mario Bros characters. They will look super cute on the buffet table and kids will love them! 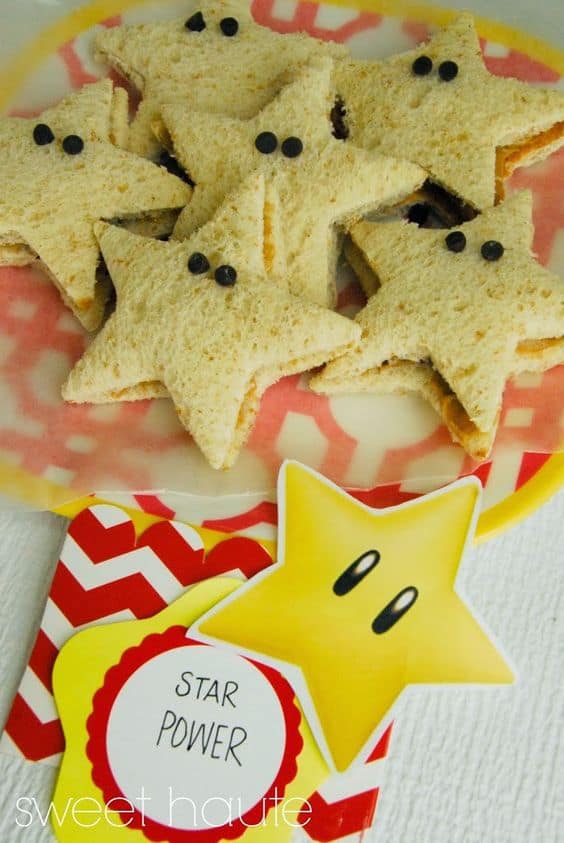 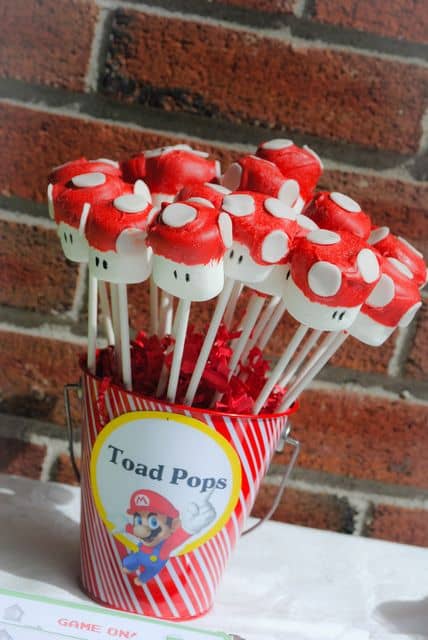 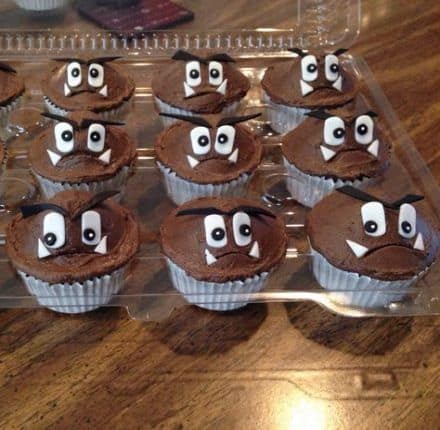 Another party food idea inspired by a character in Super Mario game is these Goomba muffins. These grumpy looking sentient mushrooms are one of the famous enemies of the Super Mario game. 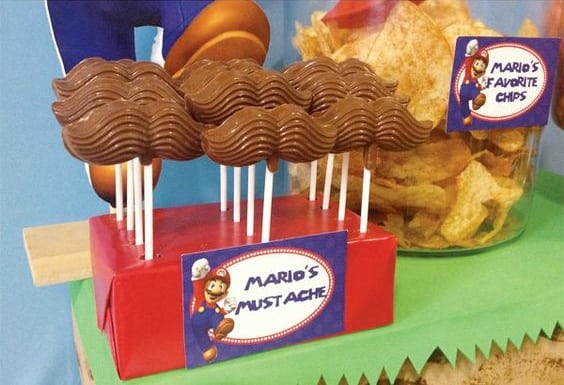 Mario and Luigi are known for their iconic mustaches too. Don't forget to add some Mario/Luigi Chocolate Mustache in your party foods. 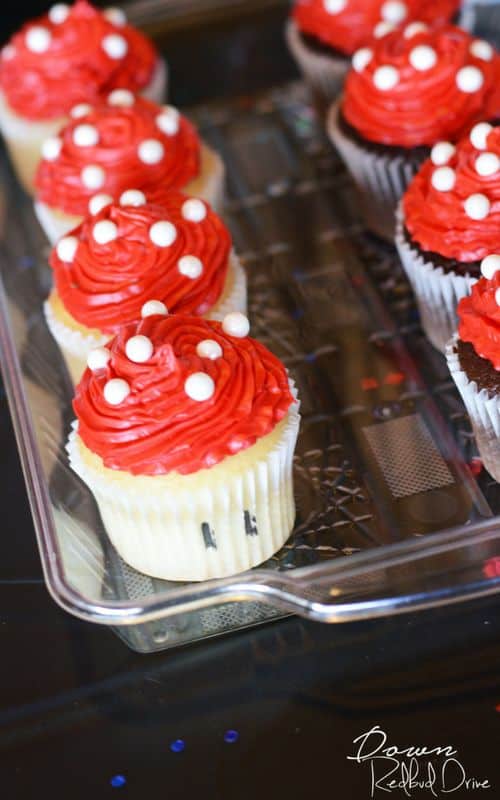 You can also prepare a simple cupcake with red frosting and white chocolate chip on top to make a mushroom inspired cupcake. 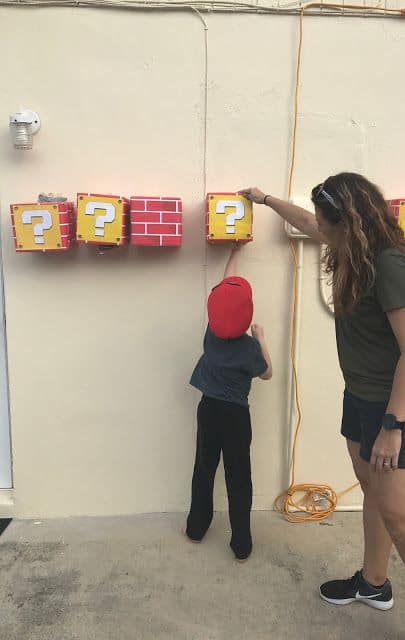 Photo Credit: Jenny on the Blog

For the party activities, you can prepare a punch-the-coin-block game for the kids. Make the famous "? Block" using a small box and fill it in with treats like chocolate gold coins. The kids will be excited punching the block as rewards will fall down. 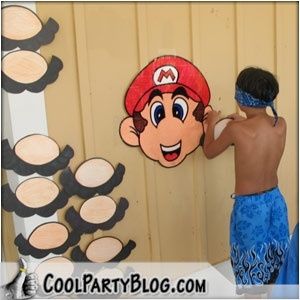 Another fun Super Mario themed party activity is this pin-the-mustache game for kids. The kid who pinned Mario's mustache on the part where it belongs (or the nearest) wins! 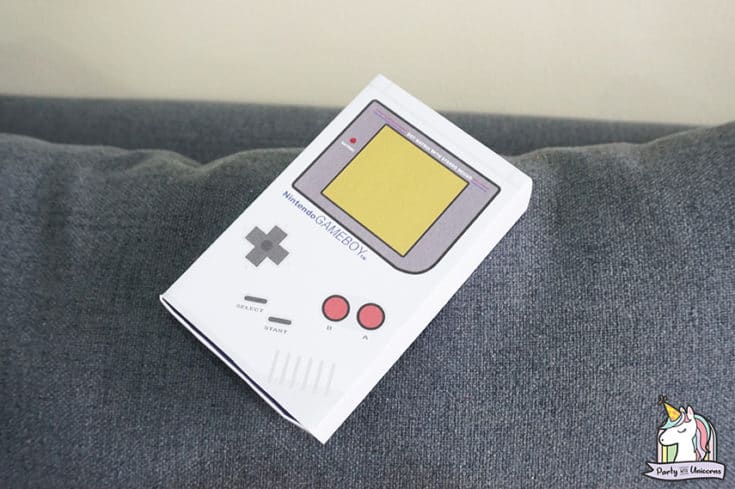 For the party favor box, you can use our free Nintendo Game Boy Favor Box template to create this cute favor box. Fill it in with treats or Super Mario Bros mini toys.

There you have it, 20 amazing Mario Party ideas. Leave a comment below if you have any other fun Mario idea that we should check out. If you plan on using our free printables, be sure to let me know if you have any issues.

Hi! I’m Carolyn. I'm a project manager, Etsy seller, Blogger and mum to three kids in Sydney Australia... and I love parties! More About Me.